Pod Aniolami: The restaurant “Under the Angels”

Pod Aniolami is located in an 18th century building on the Royal Route from the old market square to the mediaeval Wawel or King’s Castle and cathedral. For over three hundred years the building was the residence of Krakow’s goldsmiths. We were welcomed in off the hot street in an early evening and were lucky to be offered an unreserved table in the covered garden area, near to part of the kitchen that included the barbecue. This suited us fine as kitchens are always interesting to watch. We chose two different taster menus of local Polish dishes which began with a glass of Cava followed by a healthy salad of chicory leaves, radicchio, cucumber sticks and carrot in an olive oil and dill sauce. For the next course we had fried dumplings with sour rye soup. Some of the dumplings were meat filled while others were filled with cheese/potato. They were crispy and dry on the outside and moist and flavoursome on the inside. We found a light red Polish wine to accompany this course but had to revert to a Malbec for one of the the mains. For mains one of us had a delicious roast salmon, while the other had a succulent juniper marinaded wild boar steak from the nearby Tatra mountains that had been grilled over a beech fire, near our table and visible from the restaurant, which was served with red cabbage with raisins in wine. For dessert one of us had a home-made apple pie with cinnamon served warm with vanilla ice cream and egg liqueur, the other had a Cracovian cheesecake with dried fruit served with raspberry mousse. Both were delicious. At our waiter’s suggestion we completed the meal with a digestif, a locally made tincture. We had two different ones, an excellent hazelnut tincture that complemented the meal well and a quince tincture. The service was helpful and thoughtful but not over fussy. We sympathised with him when he had to cope with some noisy customers and felt he had to apologise (not needed) for the disturbance. As we were leaving he suggested we look at the cellars. Totally awesome dining area for another time, although our covered garden area was very fine. Aug 2018 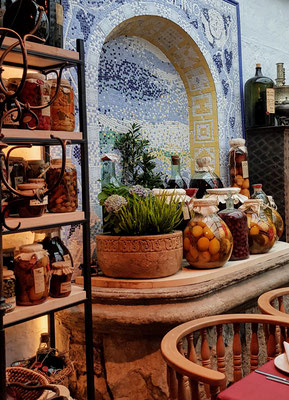 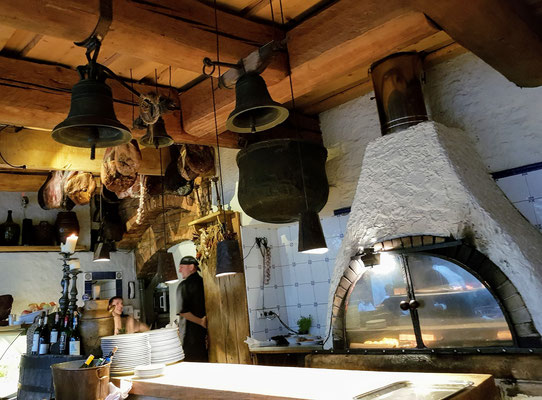 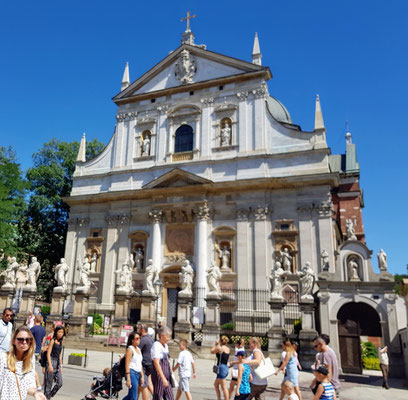